For the Labor Day weekend, the situation is dynamic. Near record temperatures are expected for much of the state, allowing for increased fire activity and smoke production. The southwestern portion of the state, and Cascades Mountains will continue to experience heavy smoke. Smoke will continue to affect other parts of the state at times, as described below. Eastern Oregon is likely to be least impacted by smoke over the holiday weekend.


Winds will transport smoke primarily to the southwestern portion of the state throughout the day on Friday, as shown in Figure 1 below. Afternoon mixing will allow smoke to lift away from the surface giving some relief during part of the day. Central Oregon should get a break from the smoke today, once the inversion breaks in late morning. The coast and Willamette Valley should also stay smoke free for the day. Eastern Oregon should experience good air quality throughout the day. Brookings, Gold Beach, the Applegate and Rogue valleys and the southern portion of the Cascades will experience the worst smoke. 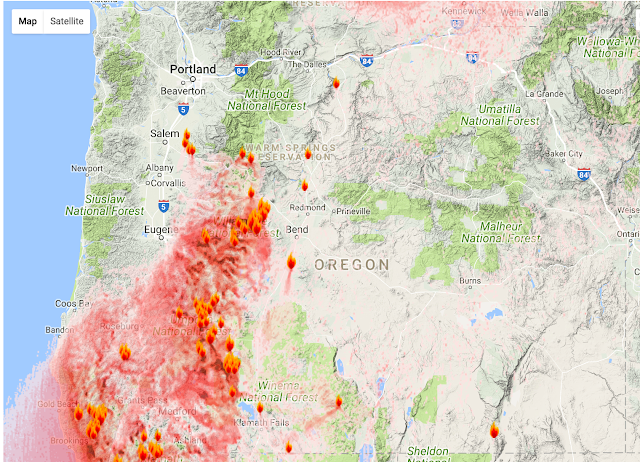 Very hot and dry weather is expected as a thermal ridge moves into the state. This will continue to dry out fuels and cause increase fire activity with the associated instability, thus causing more smoke.  East winds will occur in western Oregon bringing smoke from the Cascades all the way to the coast, as illustrated in Figure 2 below. The entire Willamette Valley will see some smoke, with the heaviest concentrations in the southern portion of the valley.  However, Central and Eastern Oregon will be relatively smoke free except for some possible light smoke or haze moving in from Idaho and Washington. Klamath Falls may get some light smoke as well from the Jade Creek fire near Lakeview. 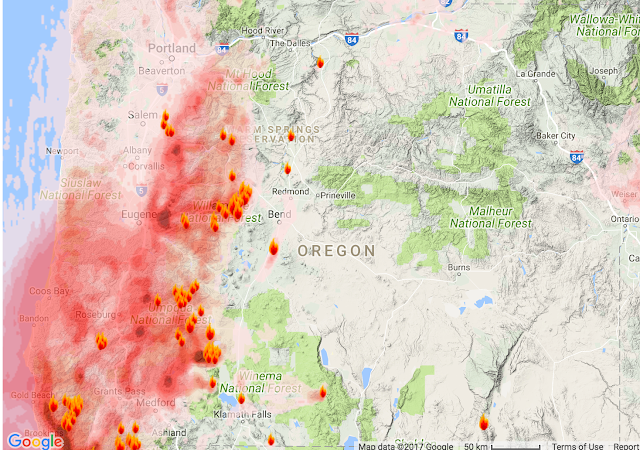 Because we love our football here in Oregon, here’s the forecast for Saturday afternoon. Oregon State is taking on Portland State beginning at 11 a.m. in Corvallis, and Oregon is taking on Southern Utah in Eugene at 5:15 p.m. The figure below is the model-projected three-hour average smoke concentrations ending at 2 p.m. (11 a.m. - 2 p.m.) on Saturday. Sorry Duck fans, that’s as far out as I can project right now. Moderate amounts of smoke are expected in both locations during game time.  A revised forecast will be provided tomorrow morning, with the new model run. 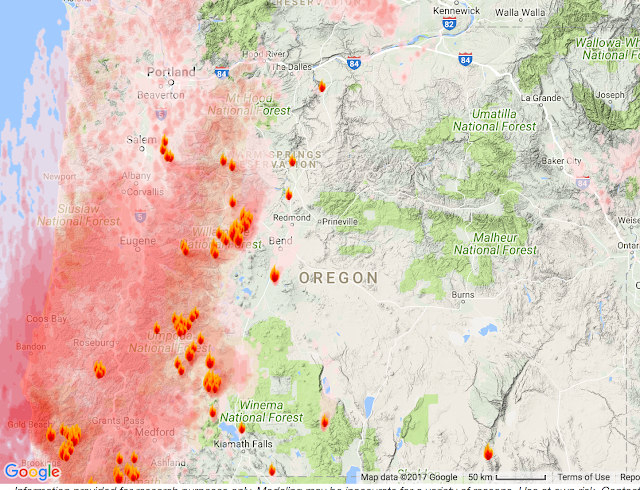 The thermal ridge will migrate to the central and eastern portion of the State on Sunday, giving some relief from the east winds which also bring smoke into the western portion of the State.  Areas of western Oregon including the Willamette Valley will start out smokey, but begin to clear as the day progresses.  The southern Oregon Coast will be similar - starting out smokey but clearing throughout the day. Unfortunately, southwest Oregon will remain smokey throughout the day.  A northwest wind will occur over the Cascades transporting smoke from the fires into central Oregon. A north wind will be present over central and eastern Oregon pushing the smoke to the south. Good afternoon mixing is expected which may help dilute some of the smoke in the central portion of the state.

The day will  be marked by a transition in smoke transport on the west side of the Cascades.  The most pronounced difference will occur in Roseburg and south, where the morning will start out with east winds and smokey,  but clearing in the afternoon as winds shift and come from the west.  In the southwest part of the state, the coast will start out smokey, but should clear in the afternoon with the wind shift.   The Willamette Valley will experience winds out of the north, keeping much of the valley smoke free.  The Cascades will see an east wind most of the day, keeping smoke present east of the fires most of the day.  In central Oregon, the winds will be out of the north in the morning but shift to the east in the afternoon.  The east wind will likely keep Bend, Redmond, and Sisters free of smoke most of the day, after the morning temperature inversion breaks.  The east side of the state will start out with a north wind, but shift to the east in the afternoon.  This will result in relatively good air quality most of the day on Monday.

Please refer to the Air Resource Advisor Reports on this blog for more detailed forecasts associated with individual fires.

Disclaimer: Weather and fire activity can change quickly.  Please check back for updates to these forecasts as conditions change.
Posted by Katherine Benenati at 4:17 PM 16 comments:

“Many people can be at risk for illness during periods of extreme heat,” says Emily Wegener. “We want everyone to arm themselves with information so they know how to stay safe this summer.”

Heat stroke is a serious illness characterized by a body temperature greater than 105 degrees. Symptoms may include dry red skin, convulsions, disorientation, delirium and coma. Onset of heat stroke can be rapid; serious symptoms can occur within minutes. Treatment involves the rapid lowering of body temperature using a cool bath or wet towels. Keep victims of heat stroke in a cool area and immediately call 911.

Heat exhaustion is a milder form of heat stroke that may develop due to a combination of several days with high temperatures and dehydration in an individual. Signs of heat exhaustion include extreme weakness, muscle cramps, nausea or headache. Victims may also vomit or faint. Heat exhaustion is treated with plenty of liquids and rest in a cool, shaded area. Those on a low-sodium diet or with other health problems should contact a doctor.

Anyone can be overcome by extreme heat, but some people are at higher risk than others. They include the elderly, the very young, and people with mental illness and chronic diseases.

Hot weather tips:
•     Drink plenty of fluids, such as water and fruit juice, to prevent dehydration. Alcohol can impair the body’s sweat mechanism, as can some common medications, such as antihistamines and diuretics.
•     Wear loose-fitting, lightweight and light-colored clothes.
•     Avoid direct sunlight by staying in the shade and wear sunscreen, a wide-brimmed hat and sunglasses.
•     Stay in air-conditioned areas when possible. If your home is not air-conditioned, consider a visit to a shopping mall or public library or stay with family or friends who have air conditioning. Contact your local health department to see if there are cooling shelters open in your area.
•     NEVER leave pets or children in a car, even with the windows cracked.
•     Check on elderly relatives or neighbors at least daily, and make sure they have a cool environment to live in during extreme heat.
•     Take it easy when outdoors. Athletes and those who work outdoors should take short breaks when feeling fatigued. Schedule physical activity during the morning or evening when it is cooler. 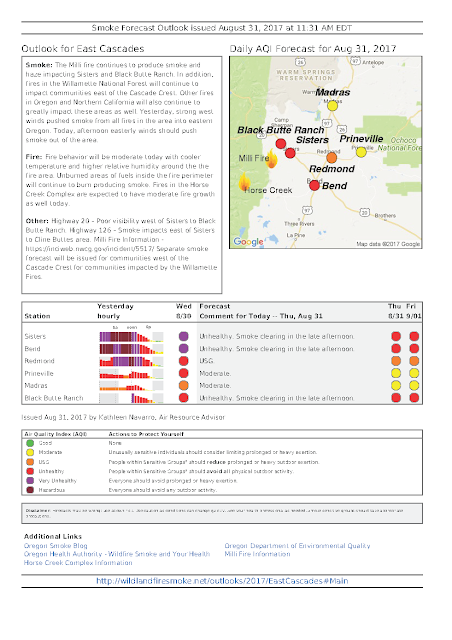 Because You Asked: How Can I Keep Indoor Air Clean During Wildfires?

When there is heavy smoke outside, one of the best things you can do is get out of the smoke. If you can’t leave the area until air quality gets better, this often means going indoors. There are a few things you can do keep your indoor air as clean as possible. Keep your windows and doors tightly closed. A high efficiency particulate air filter (HEPA) or electrostatic precipitator filter (ESP) can be a good investment for people who are sensitive to health effects of smoke. These can help clean smoke particles out of your indoor air.

If you don’t have an air filter, fine particles can creep into your home over time. Watch for times of day when the smoke clears. During those times, open your doors and windows to “air out” your home. That way, you’ll start with cleaner air if the smoke returns.

Reducing other sources of indoor smoke and dust will also help keep your air cleaner. If you don’t enjoy vacuuming, there’s good news! It’s best to avoid vacuuming during heavy smoke. Vacuuming can stir up dust. You can also improve air quality indoors by not vaping or smoking (tobacco, marijuana, or other products), not lighting candles, and not using gas, propane, or wood-burning stoves.

Keeping the air inside your car clean is also important when you need to run errands or travel. The best thing to do is avoid driving in smoky areas. If you need to drive when it’s smoky, there are things you can do to avoid smoke. Keep windows rolled up and vents closed. Set the air conditioning on “re-circulate” to avoid bringing smoke into your car.
Posted by Katherine Benenati at 12:25 PM 2 comments: 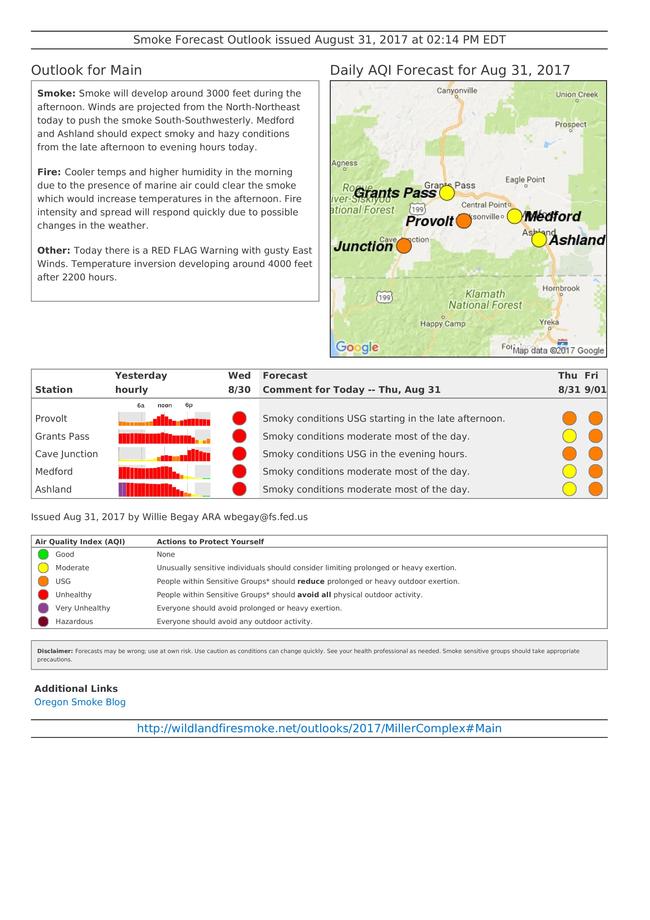 Posted by Katherine Benenati at 10:21 AM No comments: 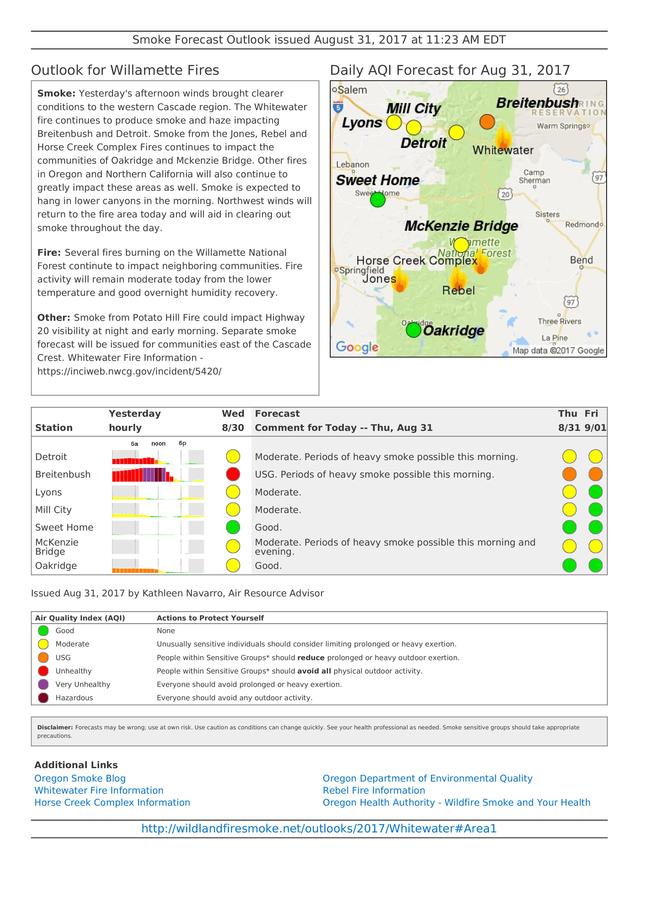 *Sensitive Groups include people with heart or lung disease, children, pregnant women and older adults
Posted by Katherine Benenati at 9:04 AM No comments: 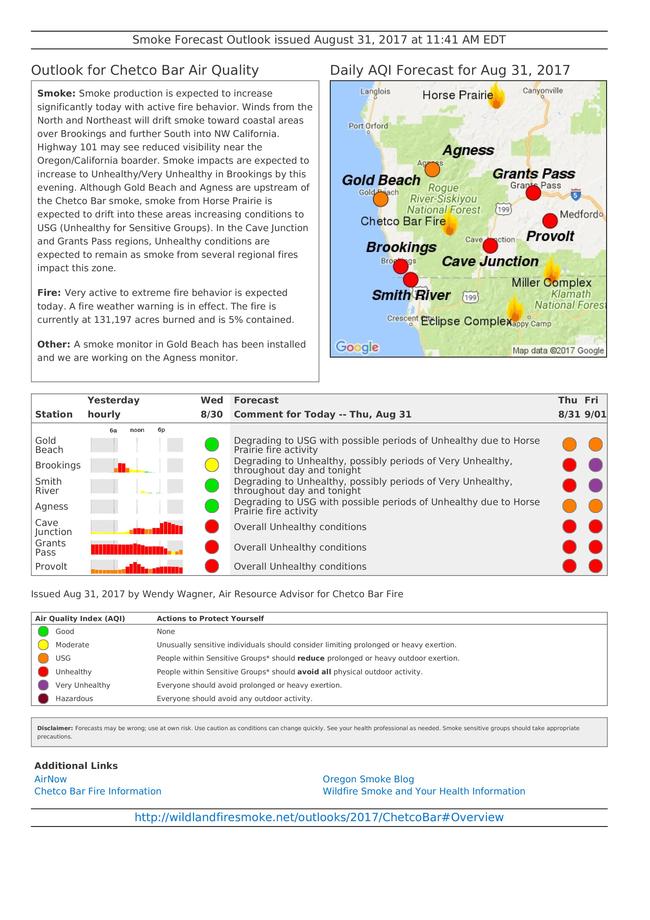 *Sensitive Groups include people with heart or lung disease, children, pregnant women and older adults
Posted by Katherine Benenati at 9:03 AM No comments:

Posted by Katherine Benenati at 8:56 AM No comments: We’re happy to help answer questions and comments when possible. We moderate comments for spam before publishing to the site. We appreciate your patience as we find the most knowledgeable person to answer your question.